Motorcycles improve quality of life – for everyone!

T ransport is a hot political topic right now, with two challenges in particular – congestion and especially air pollution – high on the agenda.

It’s fair to say that there’s no simple solution or silver bullet to fix these problems. However, any solution that’s to be found is going to require a broad and informed transport strategy. It may seem obvious (to some of us) that such a strategy would embrace the advantages of two-wheelers; alas, in the UK at least, that doesn’t seem to be the case.

A 2011 study, conducted by the University of Leuven in Belgium, assessed and modelled traffic congestion on a busy route between the cities of Leuven and Brussels. The results of this study suggested that if only as few as 1 in 10 people making this journey switched from a car to a two-wheeler (scooter or motorcycle) then there could be a corresponding 40% reduction in traffic congestion, with air pollution levels seeing a 6-10% improvement. That would be equivalent to recovering 15,000 hours every day wasted sitting in traffic queues in just this one sample area, whilst achieving a significant reduction in associated air pollution from stationary or slow-moving vehicles.

So, there we have some compelling evidence that motorcycles don’t just benefit their riders but potentially all road users, and the rest of society too, once cleaner air is factored in to the equation.

There’s a particular problem with attitudes to motorcycling in the UK, not least within the formulation of transport policy, whereby bikes tend to be perceived almost entirely as a problem (of safety), rather than delivering potential benefits.

This issue was formally acknowledged in a 2016 strategy document jointly produced by the National Police Chiefs’ Council (NPCC) and the Highways Agency. Demonstrating a refreshingly progressive attitude, their Transport Policy Framework document was produced to influence ‘how government transport policy should be evolved to recognise motorcycling as a potential solution to many transport and environmental challenges.’ It goes on to state:

‘It is entirely possible that the existing unwillingness to fully incorporate motorcycling into mainstream transport policies stems from a perception that motorcycling represents nothing but a safety problem; that in a wider societal sense, motorcycling doesn’t matter, that wider society would not miss motorcycles or scooters if they were removed from the roads. This thinking needs to be reconsidered and negativity removed – at all levels.
This is important, because the current approach to integrated transport policy appears to exclude motorcycles. Consequently, motorcycles are seen as a problem rather than a solution by many. The perceived lack of a motorised alternative to the car means that there has been no meaningful reduction in car use. Cities remain congested as a result.’

Fortunately, it seems that at least some of the general population aren’t waiting to take their lead from transport policymakers and are recognising the benefits of bikes for themselves. 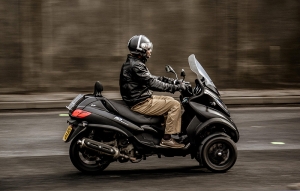 According to the Motorcycle Industry Association, 2016 saw sales of motorcycles and scooters showing positive signs of an increase, with overall sales up by 11.7% over the previous year. This runs counter to fears that the industry was facing an inexorable decline as the number of new riders had seemed to be dwindling over previous years.

Steve Kenward, CEO of the Motorcycle Industry Association, identifies two distinct factors shaping this trend: “With rail fare hikes, public transport strikes and increasing congestion on our roads, many people are turning to motorcycles and scooters as a more affordable and efficient form of commuter transport, which is reflected in the type of bikes which are selling well.” Meanwhile, “The leisure market is strong too, with sales of bikes popular for trail and adventure riding also performing particularly well throughout the year.”

This is encouraging, but there’s still some way to go towards improving the perception of motorcycling in the UK.

Visit any city in continental Europe and you’re immediately struck by how many more motorcycles and scooters there are on the roads, and how their riders broadly span the social spectrum too.

Meanwhile, in the UK, motorcycling continues to be perceived by many as a marginal, high-risk activity, and bikers as part of some kind of outlaw culture.

In part, I think this attitude derives from an overemphasis upon motorcycling’s perceived risks. That, in turn, continues to shape public policy in a direction that has tended to place barriers in the path of a more positive uptake of motorcycles as a viable transport option.

Of course, motorcycles aren’t always practical in every situation. Even the most committed biker would have to admit that there are many occasions when you need to use a car, such as moving large or bulky objects, or transporting children, animals, or multiple passengers. And we can’t forget the UK’s consistently dismal weather. Much as we often criticise those trapped in their ‘steel cages’, the fact is there are plenty of occasions when cars are simply a necessity.

It’s clear that continued training and rider development has an important role in reducing accidents and road casualties and, by extension, in improving public perception of motorcycling’s associated risks. In that respect the advanced riding community are playing their part in shaping a social and cultural shift that may eventually benefit the whole of society, helping to make our cities move more freely and making them more pleasant places to live in. That’s certainly a vision worth promoting.