An occasional post series in which club members review their own bikes, or ones that they’ve recently test-ridden.

A couple of years back I booked a test ride with a Ducati dealership. They very generously handed me the keys to an 1199, telling me I could take all day with it if I wished, as long as I brought it back undamaged. At the time this was the largest capacity, most powerful motorcycle I’d ever ridden; and remains so still, come to that.

Frankly, it was an animal. A big, fierce, apex predator type of animal. Allow the 1199 to stretch its legs and fall into its natural gait, tapping only a moderate snack-size wedge of its abundant torque, and by the time you were shifting up from third gear the speedo was already deep into three figures as the bike hurled you effortlessly, beguilingly, towards a potential custodial sentence. Undoubtedly fun, and very intoxicating, but if you want to maintain at least some semblance of social responsibility then you have to constantly exercise a very great deal of restraint when using a bike like that on UK roads. The fact that the 1199’s performance has now been eclipsed by the 1299 Panigale really just boggles the imagination.

That isn’t to say that I don’t totally appreciate the top-trumps appeal of such hyperbikes, but at the same time I remain a firm advocate of the medium-size class too. More wieldy, you can work a smaller bike harder, exploring more of its capabilities, and that’s intrinsically satisfying. Nor are they slow, by any stretch. A half-decent 600 can get close to doubling up the national limit without too much effort, in the unlikely event that circumstances call for it. But on a day-to-day basis you can use so much more of a middleweight’s potential before things start getting properly anti-social, and for me that makes for a more engaging riding experience.

Such considerations came into play last year when I began searching in earnest for my next bike. 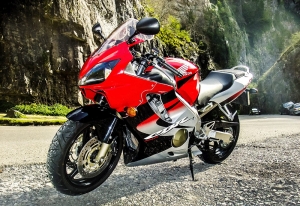 The original CBR600F was a bike that Honda had evolved through many iterations, and my fuel-injection example of the final production run is a testament to this generational refinement.

As part of my research, Fowlers lent me a new model CBR650F (Honda’s current reincarnation of their renowned middleweight F series) to test for an afternoon. It was a nice enough bike, but whilst I could appreciate its many positive qualities I returned from the test ride feeling I wasn’t entirely convinced.

Moreover, a very modest budget, and a reluctance to enter into PCP finance deals, was a significant factor influencing my purchasing decision.

A while later, out of curiosity, I then tested a 2001 model CBR600F, for sale with another dealer, and I was struck by how much more I enjoyed riding it. It felt roomier, and the engine and handling more tractable and relaxed somehow. It had covered 30,000 miles, and was looking a bit scruffy, but it still felt completely sound mechanically.

I walked away from that one, but the impression it had made stayed with me. By this time I’d  begun routinely scanning BikeTrader and before too long I was fortunate to spot a mint 2004 F with just 5,500 genuine miles. A deal was struck at a little over £3000.  Really, it was barely run in, and seemed to have spent its previous decade gently pursuing an undemanding, cosseted existence with its one previous owner. There are such gems to be found, if you’re patient enough.

And I must say that after 9 months of ownership I absolutely love it, and haven’t regretted the decision for a moment.

Phased out in 2007, when sales of this sports-tourer version had flatlined at the height of full-on supersports popularity, the original CBR600F was a bike that Honda had evolved through many iterations, and my fuel-injection example of the final production run is a testament to this generational refinement. It’s beautifully made, with every touch-point and control surface exhibiting that tangible sense of Honda quality and attention to detail that you often detect the moment you first sit on any of their machines. Styling is undoubtedly old school, and graphics are of-their-time, but it remains a handsome device all the same.

I’ve owned various middleweights, although previously all were twins or big singles. The CBR is my first inline-four and, as such, has an entirely different character to anything I’d ridden previously.

Actually, in some respects it reminds me of a 2-stroke (I’m old enough that my biking career began back in the era of RDs, LCs,  RGVs and the like). Like my recollections of those bikes the CBR’s engine undergoes a similar dramatic shift around 8000 rpm, beyond which it delivers a sudden, frantic burst of thrust, accompanied by a furious intake howl, that for me is reminiscent of a two-stroke hitting its powerband.

In fact, the CBR’s 14,000 rpm redline is something I’m still getting accustomed to. After years with a V-twin that was bumping the limiter at 9000rpm I still find it hard to comprehend that the CBR’s engine can spin up so far.

But, significantly, the Honda’s engine is eminently usable and completely civilised at more moderate road speeds. Throw into the mix its near faultless handling, which is almost telepathically responsive and reassuring, and there’s really very little you can find fault with.

Is newer always better? Well, yes, obviously in many respects, but things do get lost along the way too.

Don’t get me wrong. New bikes are great – if you can afford one. Similarly, I wouldn’t dispute that a big bike, with relaxed power delivery, isn’t still the ideal way to soak up big distances.

Still, there’s a special pleasure to be had from middleweights too. And when that middleweight is a precision tool like the Honda CBR – even an old one – then you’ll be well enough equipped.